In 2014 Park City was issued Utah Discharge Elimination Systems (UPDES) permits for the discharge of water draining from the Judge and Spiro mine tunnels into McLeod and Silver Creeks. Water from both tunnels exceeds stream water quality parameters identified in these permits.

Due to the cost and complexity of bringing this water into compliance with UPDES permits, a Stipulated Compliance Order (SCO) was entered into between the Utah Division of Water Quality and Park City. The SCO requires that Park City develop and implement a plan to bring discharge into compliance by the year 2024 for the Judge Tunnel and 2033 for the Spiro Tunnel.

In addition, the existing Spiro Water Treatment Plant is aging and will soon need significant investment to keep it operational. While the existing plant consistently produces high quality drinking water, it cannot treat to certain parameters in the UPDES permits, and it lacks capacity to maximize available water from the combined Judge and Spiro Tunnel water sources.

The project bid amount is $8.2M

Traffic control along Hwy 248 shifting lanes around work. Short water outages while existing lines are taken out of service and connected to the new transmission lines.

The project is scheduled to being in September 2019 and conclude in April 2020.

Public Utilities is pursuing reductions to our water and energy footprint by actively monitoring Upper Deer Valley for non-surfacing underground leaks from our water pipe network.

Approximately 20 sensors will be installed on fire hydrants in Upper Deer Valley. These sensors will measure pressure and acoustic noise in the system hundreds of times per second. Leaking pipes make noise that can be detected by these sensors. The data will be transmitted wirelessly to a software system that will analyze the data to identify where pipes are leaking. No impact to water users or the community is expected from these sensors.

The project is scheduled to being on April 16, 2018 and will last approximately 6 months.

Public Utilities manages water system assets through a program that is intended to keep the water system operating at defined service levels while reducing risk and achieving the lowest life-cycle cost.

The Project has been publically bid and a contract awarded to Daley Excavators. Work began in April 2018 and will  continue through May 2019. Crews will work through the winter on interior projects. No excavations will occur during the winter shutdown (November - March).

The project consists of numerous smaller work items located throughout the City. See the Project Map. Customers should expect disruption in isolated and confined areas: 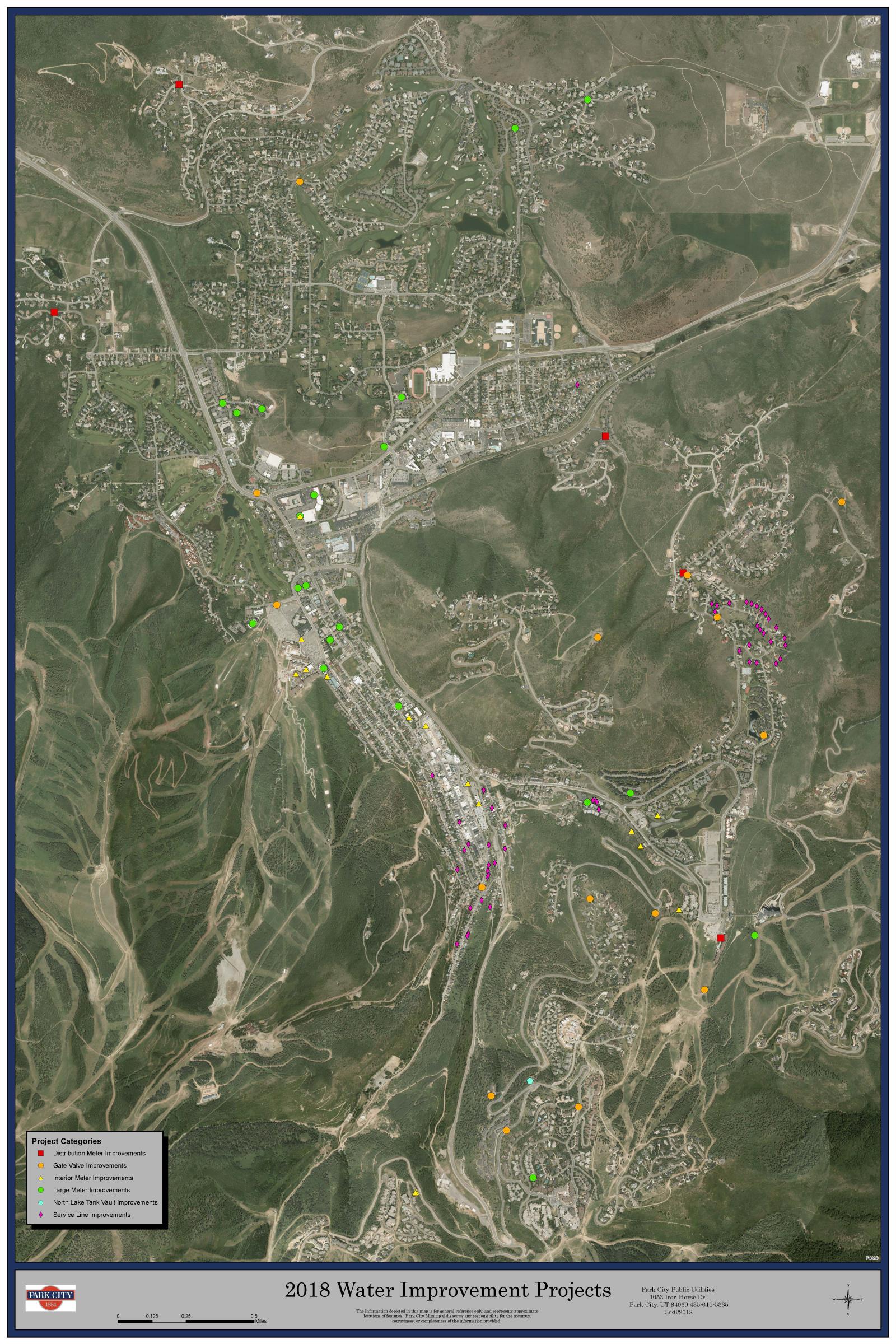 The new Deer Crest Pump Station will be a buried cast-in-place concrete structure that is equipped with pumps sized to deliver flowrates ranging from 500 gpm to 1,000 gpm.

A new 12-inch diameter water transmission pipeline will convey the imported drinking water from the new Deer Crest Pump Station to Park City's existing Bald Eagle Tank zone. The new transmission line will be approximately one-quarter mile in length and will be routed along Deer Valley Resort's "Kimberly" ski run. The project budget has been established at one million dollars ($1,000,000).

Planning for the project began in 2016. Construction is scheduled to begin in June 2019 and continue through October 2019.

This project affords the following benefits: